“The Secret of Successful Governance”, co-authored by Nabil Costa and Riad Kassis, is a new DMAH publication and an invaluable resource for Non-profits 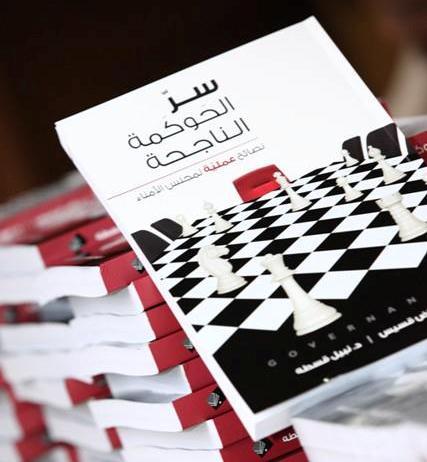 “Our main hope is to see non-profits functioning effectively for the service of God and humanity.”

Non-Governmental Organizations (NGOs), or as they are often referred to in Arab culture Civil Society Organizations (CS0s) have taken a prominent role in humanitarian work throughout the Arab world, where most of them function as service providers.  In many Arab countries, NGOs provided service delivery, networking, mobilization, and the creation of “support systems” of various kinds, ranging from day-care centers to income-generating projects.

This rise in influence of the NGO is a result of a direct need felt by Arab society.  “There is a change in mindsets in the region,” said Dr. Rima Khalaf Hunaidi, UN Assistant Secretary-General and Director of the Regional Bureau for Arab States in UNDP.  “We are moving with greater confidence in a new direction now, and there is a strong awareness of the irreversibility of change—change driven by the Arab street, not change adopted from afar.”

The development of NGOs has not been without difficulties.  The normal structure of NGO boards is not familiar to Arab culture, nor is the proper balance of those relationships. Adapting to this style of shared leadership has been a slow and difficult transition. As the Middle East witnesses  a growing number of NGOs, there is a lack of understanding of how these officers should lead their organizations.

To address the need for better governance of non-profit organizations in the Middle East, Dar Mahal Al Hayat published in April 2012 The Secret of Successful Governance, an invaluable resource that focuses on understanding the roles and responsibilities of boards of directors and executive directors of Non-Governmental Organizations.

The Secret of Successful Governance, by Dr. Riad Kassis and LSESD’s Executive Director Dr. Nabil Costa, is developed from the co-authors’ observations in the region of dilemmas and questions regarding governance board issues, “Our main hope is to see non-profits functioning effectively for the service of God and humanity.”

Dr. Costa has served in capacities as both Executive Director and board member, and sees that relationship from both sides. He currently serves as Executive Director of the Lebanese Society for Educational and Social Development, and General Secretary for the Association of Evangelical Schools in Lebanon.  He earned his Masters Degree in Education and Counseling from Haigazian University, and recently received an honorary Doctorate in Humane Letters from Samford University (AL, USA).

Dr. Kassis earned his PhD from the University of Nottingham and his Master’s Degree in non-profit management from Regis Jesuit University, Denver, US and has served as both Director and board member in several capacities. He currently works as a consultant in academic and administrative matters for the Middle East, North Africa, and Europe. He also strengthens the boards of directors of educational institutions through consultations, conferences, and workshops.

Costa noted that “Usually when we sit on a board, you can feel that it is being formed just because you need a board and CEO to fulfill the requirements of the Ministry of the Interior. But, the value of a board is much higher than that. If we are to have a board, we should do it the right way.”

“The cover of the book is a Chess game. The Chairman and the Board of Directors are likened to a King that moves in a limited area and has a defensive role. The CEO is likened to the Queen who can move and change in larger areas. If the King tries to win by himself, he cannot. If the Queen lets the King die, she loses. They need to work together to win.”

The book is unique in it’s content, Dr. Costa explained. “This book is not just written in Arabic, it is Arabized. It is written in the context of Arabic culture as well. We took the Western ideas and Arabized them to fit our culture.”

The authors met professionally in their capacities as administrators and educators in Lebanon, and enjoyed discussions of the subject of governance. Both of them had the idea to write a book on governance, and they decided to combine rather than duplicate their efforts.

Dr. Riad Kassis explained the relevance of the book to Middle Eastern culture.  “The book addresses how authority is viewed in a Middle Eastern context, and how democracy and shared values are viewed. People have been raised to view authority as being imposed, and influence as coming from above. This book teaches boards and directors how to govern effectively using influence, not just power.”

The timing of the book’s release is very relevant, Dr. Kassis observed. “It is by chance that it was written during the uprisings in this region. In the book we have briefly reflected on these events. I believe it was God’s providence that this book came out at this time when the whole value system in this region is being shaken in many ways. The book came at the right moment, I hope, to give leaders and organizations a good guide toward democracy, the understanding of authority, and the understanding of shared responsibility and accountability.

“It should be noted,” he continued, “that the issue is not only to have books on this subject in Arabic, but rather addressing the Middle East and North African context. The book makes use of up to date scholarship and research in the area of non-profit governance at the same time it was written with an Arab reader and leader in mind. It is full of case studies that are based on real stories from around the region.”

The formal launching ceremony took place at the Assembly Hall of the American University of Beirut on Sunday, April 29, 2012. A crowd of about 250 people gathered to support this important publication. The keynote speaker was Judge Dr. Ghalem Ghanem, former Chairman of the Higher Judicial Council in Lebanon. Testimonials from the book were given by Dr. Riyad Jarjour, Head of the Forum for Development, Culture and Dialogue, and former President of the Middle East Council of Churches; also Engineer Amin Al-Daouk, Chairman of the Board of Trustees of the Makassed Philanthropic Islamic Association.  Sawsan Tannoury, Publishing Director of Dar Manhal Al-Hayat was on hand to host the event.

The book is now available at The Gateway bookstore as well as many other retail outlets throughout the Middle East.