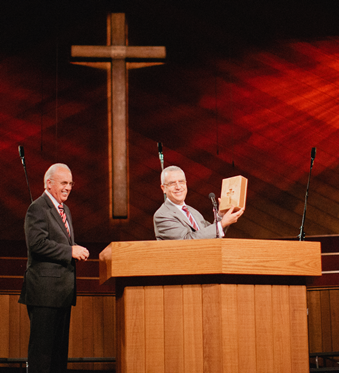 This book was chosen so that “faithful people will be able to teach others.” – Dr. Nabil Costa, Executive Director of Dar Manhal

The Arabic translation of Rev. Dr. John MacArthur’s classic work, The MacArthur Study Bible, will be a powerful addition to Christian resources in the Arab world.

While working on this book, Dar Manhal al Hayat offices and the homes of the translators became almost like beehives,” said Sawsan Tannoury, DMAH Publishing Manager. “We were turning in circles around the hive, carrying the pollen of the living Word.”

The Arabic-language edition of The MacArthur Study Bible was indeed an enormous project, taking almost three years to complete. It combined the dedicated work of numerous professionals: translators, editors, proofreaders, designers, printing staff at a facility in China, and more. In addition, the continuous encouragement and support of friends and partners was essential to its successful completion. The project faced major challenges, says Sawsan, and thus required more effort than expected. “It’s clear that when we give Jesus something small, He is able to do something big with it.” DMAH is pleased to now share the blessings of this book, which first touched the lives of those who worked on it. Said one staff member, “This book brought blessings to my life before it saw the light.”

In association with The Bible Society Amman and Lebanon, Dar Manhal Al Hayat held two book launches—one in Jordan, the second in Beirut – in February to celebrate this event, each drawing about 200 guests. Guest speakers included Dr. MacArthur himself in live broadcast from the US. “I have no doubt that this book is going to enrich the Arab library and resources,” said Rev. Dr. Edward Awabdeh, President of the National Christian Evangelical Alliance Church in Syria and Lebanon, during his book launch speech.

The MacArthur Study Bible is well-known for its comprehensiveness, including extensive explanatory notes, introductions, reading plans, maps and charts, all of which combine to illuminate the meaning of the text to today’s reader. “Study Bibles have been a means to put the word of God in the hands of Christians for many, many centuries,” said Rev. Dr. MacArthur, president of The Master’s College and Seminary and also Grace to You ministry.

This new Arabic resource makes a significant contribution to DMAH’s mission “to make accessible and available Arabic-language Christian and educational resources in the Arab world.” May this book find its way into many open hands, with its starting point in Lebanon, the gateway to the Middle East and North Africa.