Televised Easter concert brings audience to their feet in praise 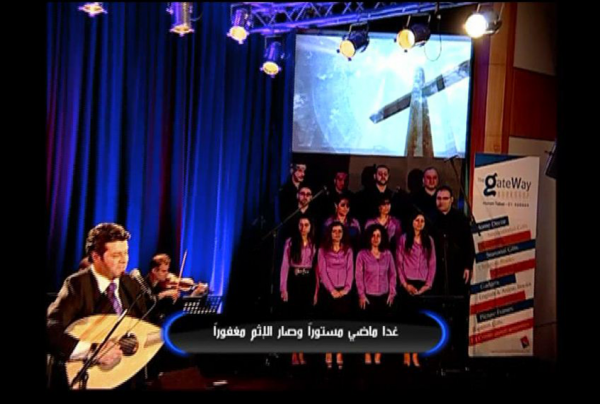 “It wasn’t just a concert; it was a worship experience, like a church.” Concert Attendee

On Easter Sunday, April 8th, a crowd of almost 700 packed the Beit Al-Tabib theatre in Beirut. Many young families brought their children to hear the message of salvation, and groups of teenagers eagerly snapped photographs of the event.

This worship concert, which was sponsored by The GateWay Bookshop with the support of partners, was the culmination of the It is Finished series that aired on a major Lebanese TV network before Easter. The program featured daily devotionals by popular Lebanese Christian singer Ayman Khoufrany, as well as his performance of songs relevant to the teaching.

At the Easter Sunday concert, which was later broadcast by the station, worship began with the singing of hymns and a choir, with voices rising up in praise.  “It wasn’t just a concert,” one attendee observed, “it was a worship experience, like a church.” Ayman greeted the enthusiastic crowd and the audience was brought to their feet during the worship, joyously cheering and clapping. People could be seen raising their hands and responding in praise.

For many attendees, it was their first experience of such abundant worship. More than 100 CDs were given away at The GateWay Bookshop prior to the concert, and over 1,000 worship CDs were distributed at the concert so that the message of hope could be brought home to share and spread.