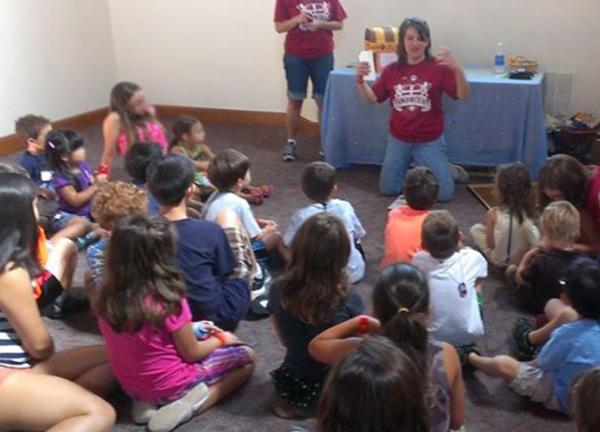 In March 2013, I had the privilege of being the landscape architect on the design team for LSESD’s new SKILD School.  This experience moved me not only because I worked with a terrific group of engineers and designers, but also because of the wonderful people I met at LSESD who inspired me with their dedication, passion, and Christ-like efforts to help all people in Lebanon.  Needless to say, when I had to come up with the mission project for our church’s Vacation Bible School (VBS) this year, Lebanon naturally came to mind.  I was excited to find a way to introduce all our VBS kids to their God family in Lebanon and to help LSESD help spread the good news of Jesus at the same time.

VBS at my church – First Baptist Church Tarrytown, New York –  is an annual community event.  Though our Sunday morning attendance is only about 100 people, we hold a week long morning Bible School for about 110 -140 kids plus 60 teens.  We try to make each year very meaningful, unique, high energy and fun.  My leadership team decided to hold a competition between the age groups to see who could raise the most money, in weight, for Lebanon.  Each day, during the mission session, I would teach the children something about Lebanon, LSESD (“my friends and the people in Lebanon who trust in Jesus”), or the Syrian refugee kids.  Since our VBS theme was “Kingdom Rock–Learning how to Stand Strong” the kids were fascinated, and a bit alarmed, to hear of real wars going on in the world.  We spoke very generally about those who knew Jesus and those who did not; we looked at the world map and found Lebanon, Syria, and the Mediterranean Sea.  We hung up a large Lebanese flag and learned about the colors and the cedar trees (Ms. Judi is that a Christmas flag?).  They saw pictures of LSESD’s kid camps and realized kids far away also enjoyed games, music, Bible stories, and prayer, just like we did here at First Baptist Church VBS.   I showed them David Cook’s action Bible and an image of a page translated in Arabic.  They were fascinated with the illustrations and that others began books from the “back”.  We also learned that they could share the story of Jesus, to one child, for 14 cents (and 10 children for $1.40, and 100 children for $14, etc.)

Then, at the end of each day, the treasure boxes of collected coins were weighed.  Much friendly, competitive, rejoicing was heard!  By the end of the week, we raised $867 (6192 copies of the “Story of Jesus” booklets!).  In addition, thanks to a generous donor, each child took home a small Lebanese flag to help them remember to pray for our God family in Lebanon and the kids who read the story of Jesus.

I am very thankful that my trip to Lebanon has not ended even though I am so far away.  May God continue to richly bless you as you faithfully serve and stand strong for him!