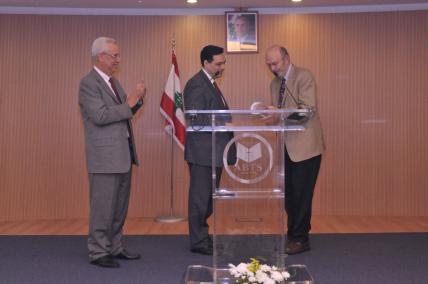 The Arabic translation of Kingdom Ethics: Following Jesus in Contemporary Context , a publication of the Arab Baptist Theological Seminary (ABTS) in cooperation with Dar Manhal Al Hayat, was just recently released at the opening ceremony of the Middle East Conference 2012 that is organized by the ABTS’ Institute of Middle East Studies. The event was held under the High Patronage of the President of the Council of Ministers, H.E. Mr. Najib Mikati, and in the presence of his representative the Minister of Education Mr. Hassan Diab.

The timing could not have been more perfect particularly as the theme of this year’s MEC conference “Love Your Neighbor as Yourself: The Church and the Palestinian in Light of God’s Command for Justice and Compassion” seeks to explore Biblical issues of justice, reflecting on the historical, political and social backgrounds of these issues, and envisioning restorative initiatives of peace and Christ-like love.

Glen Stassen, the co-author, highlighted during the event that , “…in Kingdom Ethics, we focus on Jesus’ most extensive teaching about the shape of love—the parable of the compassionate Samaritan. We exegete its meaning by asking which features of the parable would have made a definite impact on his hearers in first-century Galilee. Many people read their preconceptions into the parable. We try to be more objective. We ask what in the parable would have impacted Jesus’ original hearers.

During a reception that followed the event, Dr. Stassen was present to discuss his book and sign copies of it, which were available for purchase at the event.

News first published by the Arab Baptist Theological Seminary and used with their permission.