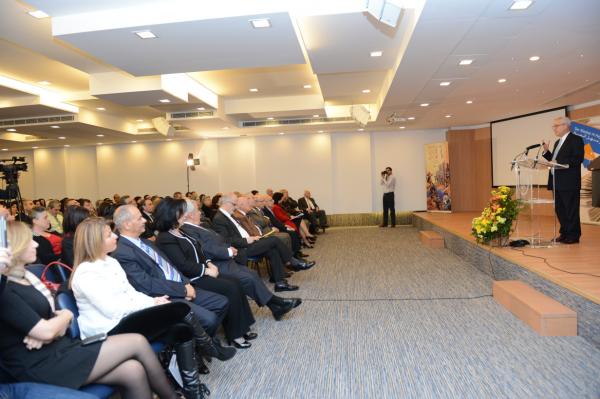 Under the theme “Christian Publishing Remains …” Dar Manhal Al Hayat (DMAH) celebrated on Saturday, March 16th, a journey that began in the 1950s in response to the need for materials for Sunday schools in Lebanon. With time, and despite serious challenges, our publishing house grew at the hands of capable and gifted people who joined at different intervals over the years. “This community stood up and refused to lose its publishing house.You are my heros“, said Frances Fuller, former Director of DMAH.

On the occasion of Fuller’s presence in Lebanon, DMAH sought to honor her and former staff during what was originally a book launching event announcing the release of the following five new resources:

Sami Morgan, a businessman and Founder of Morgan Publishing, shared that the dire need to raise a new generation of Christians that are well-grounded in Scripture was the reason he got involved in the publishing field, choosing to enrich the Arab Church with such resources as Joni Eareckson Tada’s “A Place of Healing” which was published in partnership with DMAH.  In turn, Michel Khoury spoke about his journey with cancer that led him to write “Rejoicing Amidst Pain”.

The ceremony, which was attended by church and commuity leaders and representatives, started with a short video highlighting the work of DMAH’s parent organization The Lebanese Society for Educational and Social Development (LSESD) since its founding 15 years ago in 1998.

The film was a vivid reminder of an important milestone in the history of DMAH and its sister organizations (since the handover between the founding missionaries and LSESD) as well as the phases that they each went through under LSESD’s leadership from renovation to rehabilitation to growth.  It provided the audience with an overview of how is LSESD today fulfilling its mission to serve the Church in Lebanon and the Arab World through spiritual, social and educational development.   A mission in which DMAH plays an important role through enriching the Church with much needed Christian and educational resources in Arabic language.  An aspect that was highlighted by Eric Thurman, President of Global Mission for David C. Cook, DMAH’s partners,  in a recorded video  prepared for the occasion of launching The Action Bible, a truly amazing resource for young adults.

The event was also an opportunity to honor and show appreciation to a person who has contributed much to the expansion of Christian publishing in the region, Tom Hoglind. Tom’s invaluable investment was further highlighted by Father Boutros Azar, General Secretary of the Association of Private Schools in Lebanon, and General Secretary of Catholic Schools in Lebanon, as he spoke about the importance of spreading the Message of the Gospel in Lebanon and the Arab World.

The event was closed in prayer by Rev. Salim Sahiouny, President of the Supreme Council of the Evangelical Community in Syria and Lebanon, followed by a reception celebrating the past and current ministry of DMAH.